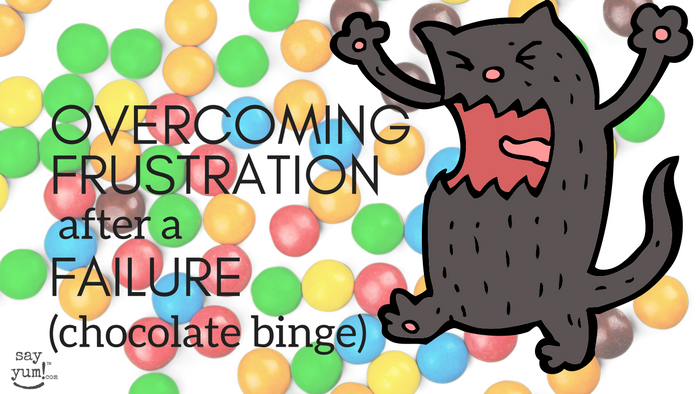 I woke up fueled by the frustration of getting off track from my eating healthy goal last night. I also felt a healthy dose of self-loathing and failure. This all stemmed from going hogwild on a box of Toffee Chips from Trader Joes following the enjoyment of a few beers. Normally this scenario, which has happened more times than I care to admit, sends me into a tail spin where I tell myself the story of how I’ll never get healthy, demoting the importance of it and setting myself up for further indulgences that day and beyond. After all, if I’ve already messed up then what’s the point of trying again?

“I didn’t fail. I just needed to conduct more research.”

Today, though my first thoughts were unkind ones towards myself, another one popped in my mind providing relief. What if I wasn’t a failure? This could actually be me needing simply to conduct more research on developing healthy habits and self-acceptance. In that moment I was able to accept that me and the Toffee Chips happened but this time I felt like I wasn’t a failure because of it. Instead, I saw it as just an experience that was research into my journey of transformation and an opportunity to learn from the incident.

My chocolate binge provided valuable insight into what causes me to get off track and out of alignment with my goal. In that moment the extra calories that initially created a wall of failure transformed into a gold medal that I deserved for surviving myself and transforming feelings of disgust and disappointment into self-acceptance and relief.

This shift in mindset was a huge victory for me. It broke the normal pattern of self-abuse and created a new mental path that has the potential to create lasting change. Lifelong change is my goal for this project and I will never give up on it. I don’t expect to live without setbacks and challenges, nor do I expect to be cured of my self-defeating habits. I only hope to bring them into my awareness where I can use them as motivation and inspiration to build courage as I walk the path of transformation with no destination, only the journey of becoming the full potential of the person I am destined to become.

What did I learn?

I made several choices before the toffee chips incident that remind me about how my body reacts to food and what to avoid in the future. First, I realized eating just salad does not keep me full for very long without some carbs. I’d been tracking food for the week and my prior lunches left me satisfied and craving healthy, satisfying meals for dinner. The lunch before the evening binge was taco salad. It was a huge salad and had lots of good protein but the only carbs were a few tortilla chips crumbled on top, so I thought I’d be in good shape. Much to my dismay, I never really felt full or satisfied after eating it.

Shortly after finishing my salad I decided I’d have just one toffee chip, and I did have only one then. That made me happy for a while. Then a couple of hours later I felt starving and was rummaging for food. I was hungrier than I’d been previous days where I’d had more carbs at lunch, and I felt desperate. I made good snack choices and finished some leftover mini wontons and cucumbers with homemade yogurt ranch dressing. Yet, I was still aching for more. The kids had been bugging me for pizza, and with a busy night combined with feeling tired I decided to go that route. I calculated the calories ahead of time, went for light cheese and a thin crust to make it a better choice. Then my husband decided to get beer. To be honest at that point I had been craving it, and decided it was OK to have one. One turned into more, further relaxing desire to eat mindfully which resulted in the big binge.

I now know at this point in time, my body needs some carbs with a meal. Besides causing insatiable hunger, I felt really low energy too. I know this can happen from a low carb diet, and seeing the results of this made me realize I need to enjoy more balanced meals.

Looking back at my food diary, I noticed that I hadn’t eaten as many calories the day before, simply because I wasn’t hungry. This combined with a lack of carbs may have contributed to my excessive hunger and carb cravings.

Wait for treats until the evening

I did have a toffee chip after my salad. I did that because I was craving something more. Previous days I hadn’t craved sugar during the day, but I had some sort of carb with my meal. Having the treat after lunch, may have intensified the cravings later. I might be better off waiting until after dinner to have a treat if I’m craving one.

I already knew when I drink, I end up over indulging. I don’t intend to live a life void of beer or cocktails. That’s not a world I want to live in. In this case it wasn’t the beer I was craving. However, it was the beer that contributed to the chocolate binge. If my body wasn’t in a state of craving, I would have been able to restrain my alcohol consumption better perhaps. Regardless, if I’m cracking a beer during the week, I will be aware of the choices that I might make as a result.

It was only one night, and I know there will be other days when life doesn’t go as planned. But the next time I wake up in the morning feeling like a failure, following a date with a box of chocolates I will remind myself: it was research. For me this creates the feeling of acceptance and encouragement that I can make different choices in the next moment instead of berating myself with the notion I can never change. So, the next time you meet the bottom of a bag, box of bottle remember you’re a good person, worthy of success and in that moment, you needed more research to fuel your motivation of transformation.